He gave performances together with Tadashi Endo (Butho-Dance) and worked at theatre-projects in Equador.

He worked with  Iris Disse in numerous projects of Acoustic Art and radio plays at  NDR, SFB, RBB. 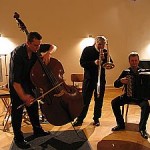 He writes music for films.

He is member of the Trio Pyrit with Alexander Suslin and Waldemar Gudi and he plays New Music.

Together with Christophe Schweizer  he founded the ensemble Eisenrot

Since 2014, HE Gödecke and  Willi Kellers are the Duo Kellers-Gödecke. They toured in Russia in autum 2014, in Moscow, Jaroslavl and  St. Petersburg.

Eisenrot – German Jazz Eisenrot: music from the backyard of your brain: Jazz, contemporary music and remembrances of traditional musical cultures blend together. Eisenrot: Musik from Hamburg, German Jazz The website of the band:  www.eisenrot.de 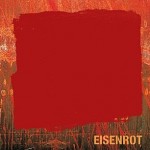 2007 the CD Eisenrot was released by Blue Pearls, distributed by  Indigo. The cover of each CD is created and handpainted by HE Gödecke and numbered.

This articles were published in the Armenisch-Deutschen Korrespondenz, the magazine of the German-Armenian Society as well as in the publication Tradition und Moderne, the content of the symposium at the  75th birthday of the composer in Erivan, Armena, 2004.

These articles are published as well at www.terterian.de, the website dedicated to the composer Avet Terterian.

Heinz-Erich Gödecke prepared something special for the 17. Hamburger JazzOpen Festival 2012, which is organized by the Jazzbuero Hamburg every year:

The experiment worked, beside strong rain and many doubts.